The Persephone myth has resonated with women generation after generation. I can think of no other myth with more retellings, ranging from Disney classics like Beauty and the Beast, to classic literature-turned-Broadway shows like Phantom of the Opera, to dozens of contemporary retellings like my novel, Persephone. 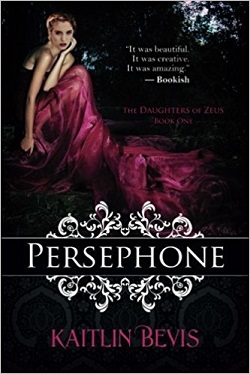 Persephone is a fascinating figure in mythology. She goes from a nameless maiden (Kore) picking flowers in a meadow, to Hades’s queen (Persephone), to the terrifying ruler of the Underworld (The Iron Queen). But through the entire transition, she never gets to tell her own story. The myth goes into Hades’s motivations, his negotiations with Zeus, Demeter’s panic, Ascalaphus’s trickery to get Persephone to eat the pomegranate seeds, random nymph bystanders, and villagers seen along Demeter’s quest. Every person in the story gets a voice except Persephone.

Her lack of her voice, her thoughts, and fears, and feelings, plucks at our subconscious, insisting there is more to the story. Is it any wonder there are so many retellings trying to fix that problem?

It’s a story that demands to be told.

And for too many years it was told wrong. Her role reduced to that of a victim. Very few versions of the myth go into her role in the Underworld afterward. How it was widely acknowledged throughout Greece that Hades was a bit of a pushover, but do not mess with his wife. She was feared, revered, and had entire cults dedicated to worshiping her name.

It’s a common problem for women in history, mythological and otherwise. Look at Helen Keller. If you walk up to a random person off the street, they can likely tell you she was blind and deaf, they can probably tell you her first sign, and the name of her teacher, but what they aren’t likely to know are the legion of accomplishments to her name. Like Persephone’s story ends when she emerges from hell for a portion of each year, reunited with her mother, Helen’s story often ends with her ability to communicate unlocked.

Greek mythology is a very good microcosm for the way women are treated in history. Though the women in Greek mythology were powerful and complex, they were often reduced to a single, definable (often passive) trait. In popular culture, Athena isn’t known as the war goddess she was, but the goddess of wisdom, known for popping up and giving heroes advice. Persephone is a victim, not a queen, Hera is a jealous lunatic, not the God-Queen, Aphrodite is painted as a whore. That’s it. That’s her entire role. While Zeus and Poseidon somehow get left off the hook for their ridiculous levels of promiscuity. If mentioned, it’s never their sole defining trait.

I figured it’s about time the stories of these amazing, powerful, flawed, and complex mythological figures got told right. So, I wrote the Daughters of Zeus series, starting with Persephone’s myth. I take Persephone from the innocent maiden picking flowers all the way to her rise as one of the most feared goddesses in the Pantheon. My next trilogy tackles Aphrodite. The other gods and goddesses make appearances all throughout the series in their full complexity. I took liberties transitioning the myths to modern day, but I remained true to the spirit of the original myths. I am not the only author envisioning these myths for a modern audience, nor are my versions perfect. But they are full of powerful women with different flaws and strengths, leaning on each other as they navigate the horrors of a pantheon steeped in patriarchy.

You should check it out.

To learn more about Kaitlin Bevis, click here. Or go here to order your own copy of Persephone.

2 thoughts on “Persephone’s Side of the Story”