By the early portion of the 1st century, it seemed that all the world knew of Rome and its might. Further, it knew of the great Caesar Augustus that reigned at the helm of the Roman state. But in the land of Kush[1], at the edges of Western interest, this was not the case. The feeling was mutual, or more accurately, mutual disinterest and ignorance, neither Rome, roman culture or the man that ruled it meant very much to the Kushites or their great queens, the Kandake.[2]

It is uncertain when the Kush royal heredity moved from male to female, but we do understand that a series of women headed the state as independent sovereigns. These women were rulers by their own right, not by widowhood, regency nor marriage. Additionally, Kandakes did not lose or diminish their power when they married or bore 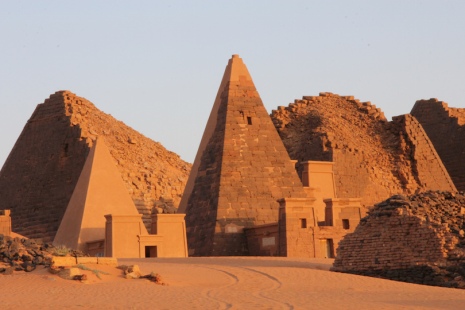 sons. Instead, it was the husband who took up the position as consort. It is from the period of Kandake rule that we have a significant collection of art and inscriptions that depict the nature of their authority. In these the queen often towers, sometimes in the throes of smiting her enemy. In others, her hands are lifted in religious devotion. In all of them, she is the central or only theme of the work. If husbands appeared at all, they were small in stature compared to their queens, if a male appeared of any significance is was most often the Kandake’s son. Frequently, consorts went completely nameless in the record.[3]

She often towers, sometimes in the throes of smiting her enemy, in others, her hands are lifted in religious devotion.

Kush already practiced a form of matriarchal succession common among the cultures of East Africa (and beyond) where royal males inherited rule through their mothers. These mothers were female relatives of the king, often a sister. It is thought that the title of 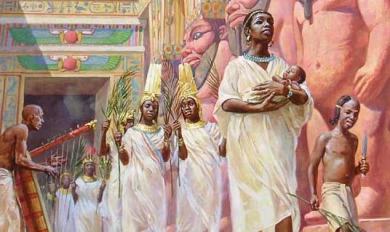 Kandake meant “queen mother,” revealing the preexisting importance of the position and offering an easily identifiable reason for the transition to singular female rule. The importance of women goes beyond the royal world, but includes a special regard for the role of wives and mothers in society. Many societies recognize motherhood as a crucial position yet it occupies a support role to male authority. In Kushite culture women were esteemed as vital monolithic entities that were active in both domestic and public worlds. Further, roles were fluid particularly when it came to power. Female roles within society embodied strength, an attribute needed for ruling a kingdom.

It appears that in Kushite culture, women were esteemed as vital monolithic entities that were active in both domestic and public worlds.

When the Romans and Kushites finally crossed paths at Premnis, a fort located near the Nile in Upper Egypt, it was the Kandake Amantitere who led her forces and brazenly brought them down the Nile and into Egyptian territory. Kushite 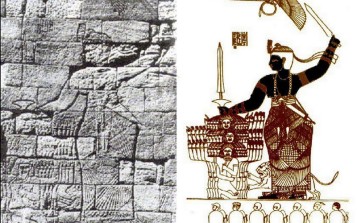 women were known to arm themselves in everyday life, so the appearance of a queen a the helm of a military effort is not surprising. According to Roman accounts, “the Candace[4] attacked the garrison with an army of many thousand men.”[5] Dio Cassius recorded the Kush army “with Candace as their leader, ravaging everything they encountered.”[6] Kandakes were not gilded rulers, decked in lace, delicate and breakable. Formidable in spirit as well as appearance, Strabo paints a picture of Amantitere that captures the imagination: masculine and in possession of one eye, having lost it is some unknown circumstance. [7]

Perhaps from gender egalitarianism, depictions of Kandakes belie beauty standards of the inheritors of the Hellenistic world as well as Egyptian ideals. Instead we are shown 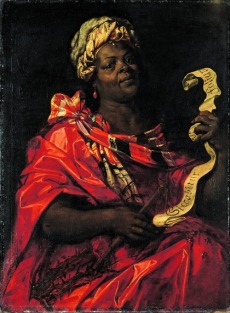 images of strong capable bodies. UNESCO describes a relief of Shanakdakhete, the first known true queen, as a women with, “a wide and powerful body adorned with many jewels…these traits which combine the promise of fertility and the exterior signs of wealth, symbolize prosperity and power.”[8] Kandakes harnessed feminine vitality and strength, there doesn’t appear to be a need for symbols of male authority nor titles to legitimatize their rule. The adherence to a separate standard is interesting as it is clear from artwork that Kushite culture had strong Egyptian influences, this included the adoption of several Egyptian deities.

Perhaps from gender egalitarianism, depictions of Kandakes belie beauty standards of the inheritors of the Hellenistic world as well as Egyptian ideals.

What stories and images left to us about these remarkable women only serve to inspire and leave us curious. What can Kush society teach us about the role of women in modern society? What things can it teach us about beauty standards? Just to know these stories and even to discover their faults would be a pursuit of new and worthy perspectives. While we can only continue to wonder, we can learn from what we do know: that women’s social roles were places of authority and that strength carried Kandakes to power.

We can be further inspired by the discovery of the stone head of Caesar Augustus buried at the entrance of Kandake Amantitere’s palace, where she tread over it with the confident legs of a monolithic and uncompromising queen.

[1] Also called Nubia. This region is part of modern day Sudan and Ethiopia as well as the location of a series of significant historical kingdoms (such as Axum).

[2] There is some uncertainty concerning the true title of the Kush queens. Some sources argue that the title “Kandake” specifically means Queen Mother and that women who held both the title of kandake and king were true independent rulers. Understanding the actualized extent of the title may not be possible until Kush hieroglyphics are fully deciphered.

[4] Kandake is romanized as “Candace” in some sources

[8] “Statue of queen and prince of Meroe,” United Nations Educational, Scientific and Cultural Organization, 08 May 2017, http://www.unesco.org/culture/museum-for-dialogue/item/en/84/statue-of-queen-and-prince-of-meroe.

One thought on “Monolithic: Kandakes of Kush, Queens of Stone”