Okay, honesty time…because I guess it would come out sooner or later: I’ve never been all that impressed with the archetype of the warrior in literature. So what if our fearless hero can out-muscle the bad guy? Yawn. Boring. I’m far more likely to be impressed by the hero who outsmarts the bad guy. Odysseus outsmarting the cyclops is way more intriguing than Odysseus going full postal on the suitors who tried to get with his wife. Sure, it took some brawn to get past that one-eyed monster…but far less brawn than if he’d just tried to muscle his way out of the situation.

So when K.P. suggested we do a month on female warriors, I really had to think about who I would pick, given that I normally don’t pay much attention to the archetype. I thought I could kind of cheat and go with Athena–the goddess of war and wisdom–but then, that’s not really in the spirit of the theme. Then I thought perhaps I could go with Joan of Arc, whom I’ve always admired…but it’s a little cliché. Besides, my past few posts have been historical, and I’ve been itching to do a literary character.

Then I remembered Camilla. Who possibly fits the spirit of the theme better than Camilla?

If you aren’t familiar with Virgil’s Aeneid, I 100% recommend it. If not for Book XI’s Camilla, at least for Book IV’s Dido. But for today, I’ll just keep the lens on Camilla.

The poem itself focuses on Aeneas’ flight from Troy, after it fell to the Greeks. The purpose of the Aeneid is to connect the fall of Troy to the founding of Rome, and ultimately, to the Roman empire. It’s essentially an empire origin story, starring its mythical hero Aeneas. When Aeneas arrives in Latium (after a long sea journey), he finds the king welcoming. The king even offers his daughter’s hand in marriage to the new arrivals. However…the queen wants her daughter to marry Turnus, a local, and she conspires with Turnus to start a war against Aeneas and the Trojans.

Long story short, she succeeds, and during the battle, Turnus kills the son of Aeneas’ closest ally, whom Aeneas had sworn to protect. Naturally, this makes things worse, and the Trojans unleash their full fury on the Latins.

Turnus…for lack of a better term…turns to a group he believes can help…turn the war in his favor: the Amazons. The women come to his aid, riding upon magnificent steeds, and their coming is described in appropriate warlike terms. Then, as Camilla dismounts her horse–the others following–she tells Turnus:

“If sense of honor, if a soul secure
Of inborn worth, that can all tests endure,
Can promise aught, or on itself rely
Greatly to dare, to conquer or to die;
Then, I alone, sustain’d by these, will meet
The Tyrrhene troops, and promise their defeat.
Ours be the danger, ours the sole renown:
You, gen’ral, stay behind, and guard the town.”1

I’m really not usually awed by “tough talk,” but this speech sends chills up my spine every time. “Hey, Turnus, if we’re talking about honor or that je ne sais quoi a true hero is born with, then I guess that makes this my fight. And since it’s my fight, I (and my fellow Amazons) get all the glory for it. And since we don’t need you, just, you know, stick around here and make sure the town doesn’t spontaneously combust or something.”

At least, that’s how I imagine her tone in my head.

And Turnus, rather than getting irritated, seems kind of giddy at having her there. He thanks her for coming and calls her “grace of Italy”2 before adding that he, and his entire army, are at her command.3

If Turnus, our prideful antagonist, is impressed by Camilla and her entourage…then I suppose I should be, too.

Of course, all is not well up on Mount Olympus, as Diana knows her champion’s fate is to die in battle…and even though they’re gods, they can’t change fate. Phoebe, Diana’s nymph, wishes that whoever kills Camilla in battle with “not pass unpunish’d from this

And with that, the Latin and Trojan forces go to war.

With all that build-up, it might seem that Camilla would meet her match on the battlefield, right? That perhaps our fearless hero Aeneas might prove to be stronger than she. That as she faces him, her downfall is his sword because…well, because he’s the dauntless hero, and she’s fighting for the side we’re kind of rooting against. So that’s what happens to Camilla…isn’t it?

Nope. Actually, Camilla’s actions on the battlefield are every bit as good as her reputation. She’s a force of pure brutal energy, slaughtering Trojans left and right. She is “resistless” and “pleas’d with blood.”5 We are the regaled with a list of her kills–all gruesome, but all fair. She even kills two men at once by throwing her spear so hard it runs through one guy and pierces the second.6 And then she goes around taunting all of the men she’s killed, asking if a woman warrior was just too strong for them.6

So one might ask, if Camilla is so good at being a warrior–so good that the general of the Latin army is willing to hang back and let her take the lead; so good that she and her entourage are slaughtering the Trojans in droves; so good that she can kill two men at once while taunting the ones she’s already killed–who on earth could possibly take down the indomitable Camilla?

Some nobody Trojan named Aruns.

What happens is this: Jove is surveying this “unequal fight”7–it just isn’t fair. Camilla’s side is clearly much stronger than the Trojans. He needs to do something about this. So, as the Trojans start to retreat, he puts a fire into Tarchon, a Trojan leader, and Tarchon delivers an impassioned speech, reminding the Trojans that they’re losing to a bunch of weak women, and they need to turn around and fight.7 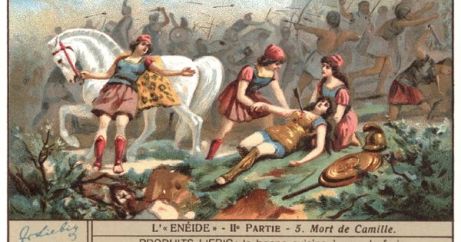 Aruns, another Trojan, decides that he will be the one to put an end to this massacre. He sneaks up behind her and throws his javelin. It strikes home and comes through the other side of her chest.8 Immediately, he turns in shame and runs because, to the ancient warrior, nothing was worse than killing an opponent from behind. It was seen as pure cowardice. In this case, the ends do not justify the means.

What I find most fascinating about this section is that, while typically I laud a character who can outsmart his or her opponent, in this case, Aruns doesn’t outsmart Camilla–he cheats. It’s not a delicate skirting of the rules, but a shredding them up altogether.

And the poem recognizes this. Even though it’s the Aeneid, and our dauntless hero Aeneas fights for the Trojans, the poem does not recognize any admirable thing about the Trojan Aruns stabbing Camilla from behind. Camilla is presented as strong, bloodthirsty, courageous, and fair–all of her kills were met front-to-front on the battlefield. So it is somewhat ironic that her defeat comes through what amounts to treachery.

Aruns, called now by the name “traitor,” does not go unpunished. Opis, one of Diana’s sentries, sees him running away, and she says:

“Thy backward steps, vain boaster, are too late;

Turn like a man, at length, and meet thy fate

Charg’d with my message, to Camilla go,

And say I sent thee to the shades below,

An honor undeserv’d from Cynthia’s bow”9

Thus Aruns meets the same fate as Camilla–Opis shoots an arrow through his heart.

Camilla’s cause, however, does not end with her death. As the Latin men run back to their town, the Latin women who witnessed the treachery from their place on the wall, were filled with such a rage that they grab rustic poles and “imitated darts”10 and basically begin hurling down at the Trojans whatever is in reach.

Let me repeat that slowly–while the men run back to the town and close the gate behind them, the women stand on the wall and throw things at the Trojans to avenge Camilla’s death.

That’s a pretty cool image, if you ask me. A fierce female warrior who could only be taken down by one of the worst ancient war crimes is avenged by a group of women watching from a wall. All in a poem written in Latin some 2,000 years ago. About an event that happened some 3,000 years ago.

So even though I’m not typically attracted to the warrior archetype, I have to admit an admiration for Camilla. I also have to hand it to Virgil, who writes a story about war that asks the reader to sympathize with both sides…and does not excuse a war crime, even when committed by the protagonist’s side.

Camilla’s legacy is that she strode into battle with confidence and inspired that same confidence in others, even in death.

*Citation Note: My version does not have line numbers, and I could not find a good online translation that included them either. Therefore, I am using the reference point numbers from this web link: http://oll.libertyfund.org/titles/virgil-the-aeneid-dryden-trans#lf0555_head_013

All quotes are from the Dryden translation.