I am taking a hiatus from blogging this month so to kick off our “Lady Midnight” theme for August, I’ve decided to bring you three of my favorite “modern” books featuring women who walk on the dark side…

The Prydain Chronicles by Lloyd Alexander

I’ve mentioned these books before in my post on the Morrigan. They’re loosely based on the Welsh Mabinogi, but one of the chief antagonists is a woman named Achren.

I say “antagonist”…but she isn’t always. One of the things I love about this series is that it shows motives may be marbled. Achren is a powerful sorceress who’s been upstaged by her former pupil, and she wants revenge. She’ll do anything to get it, even if that means killing the protagonist…

These books are more in the middle grade set (I first read them at age 12), but they’re also books I go back to again and again and again because the story and characters are just that compelling.

“It was then Taran saw [Achren] held a weathered branch of driftwood. She lifted it high and Taran gasped as in her hands it blurred and shimmered. Suddenly in its place was a dagger.” (The Castle of Llyr)

The Thief by Megan Whalen Turner

This one just got re-released with a new cover design! And Carrie did a post on Attolia not too long ago.

This is, technically, a series. And Attolia–as Carrie pointed out–does undergo character development (to be fair, so does Achren in The Prydain Chronicles). However, her portrayal in this first book is nothing short of chilling. The thief of the title, Gen, works for the King of Sounis, but she offers him a chance to work as her thief…or be executed for stealing from her lands. So, not much of a choice. She’s used to getting what she wants.

“‘You are promised to someone?’ said the queen in disbelief.

‘Surely I am a better mistress to serve?’

‘You are more beautiful, Your Majesty.’ The queen smiled again before I finished. ‘But she is more kind.’

So much for discretion. The smile disappeared. You could have heard a pin drop onto the stone floor as her alabaster cheeks flushed red. No one could ever accuse the queen of Attolia of being kind.” 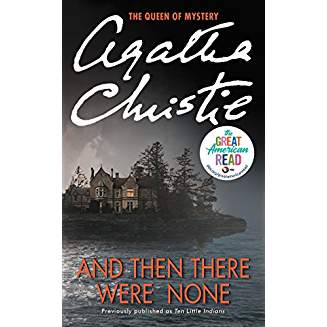 And Then There Were None by Agatha Christie

Okay, so this one isn’t fantasy, but it is a bit historical. I do not want to give away any spoilers for those who haven’t read it, so I won’t spend much time here except to say that this book is an excellent look at the evils of hypocrisy.

“She didn’t want to die.

She couldn’t imagine wanting to die…

Death was for–the other people…”

Of course, if you want more historical takes, there’s always anything Arthurian, The Oresteia, The Aeneid, etc. But since I’m always sharing the ancient/medieval works, I thought it might be fun to share some modern classics, too! What about you? I’d love to hear some of your favorite books that feature some “lady midnights”!

Perspective is one of the most powerful tools available to writers. It defines the reader’s entry point into the story and shapes their view of the characters. One of my favorite examples of this can be seen in The Queen’s Thief series by Megan Whalen Turner. The series, which is currently made up of five books with a sixth planned, was inspired by ancient Greece. In Turner’s world, three small countries occupy a peninsula off of the main continent—Sounis in the west, Attolia in the south, and Eddis plunked between the two.

The first book in the series, simply titled The Thief, is told in first-person from Eugenides’s perspective. He’s a teenaged thief whose only chance at getting out of the Sounis prison is to try to steal a mythical stone that is said to confer on the holder the throne of Eddis. Although Eugenides, known as Gen, is the main character of this book, it’s a tertiary female character who makes only a minor appearance toward the end—the queen of Attolia. Her given name is Irene, but in Turner’s world, leaders take on the name of their country. Gen is in prison—again—when he finally meets Attolia, whom he describes as follows: 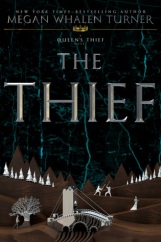 “Standing in the light, surrounded by the dark beyond the lanterns, she seemed lit by the aura of the gods. Her hair was black and held away from her face by an imitation of the woven gold band of Hephestia. Her robe was draped like a peplos, made from embroidered red velvet. She was as tall as the magus, and she was more beautiful than any woman I have ever seen. Everything about her brought to mind the old religion, and I knew that the resemblance was deliberate, intended to remind her subjects that as Hephestia ruled uncontested among the gods, this woman ruled Attolia.” [1]

This seems like a lot to unpack, especially if you’re not familiar with the series. Our brief glimpse of Attolia tells us two important things—she’s beautiful, and she’s powerful. However, as Gen points out just a page later, though Attolia is beautiful, she is less than kind—to the point of ruthlessness. There are even stories of how she poisoned her husband on their wedding day in order to claim the throne.

Through Turner’s deft use of Gen’s first-person point of view, readers are exposed to the tension among these three countries as well as his strong and poor opinion of the queen of Attolia. Consequently, it’s easy to side with him and dislike her. So imagine the reader’s surprise when Turner gives Attolia a point of view in book two, The Queen of Attolia, titled after the character in question. If she is ruthless, it is because she has had to be. “I inherited this country when I was only a child, Nahuseresh,” she says. “I have held it. I have fought down rebellious barons. I’ve fought Sounis to keep the land on this side of the mountains. I have killed men and watched them hang. I’ve seen them tortured to keep this country safe and mine.” [2] Perhaps Gen is right when he says she’s not kind,

but perhaps she was never given the chance to be.

By using Attolia’s point of view, Turner makes it clear that Gen’s initial assessment, though not wrong, isn’t the whole picture. Through her point of view, we get passages such as this: “She thought of the hardness and the coldness she had cultivated over those years and wondered if they were the mask she wore or if the mask had become her self. If the longing inside her for kindness, for warmth, for compassion, was the last seed of hope for her, she didn’t know how to nurture it or if it could live.” [3] We find that the true Attolia is a far cry from the stony-faced queen she presents to others.

Although Turner’s series offers a fully realized fantasy world as well as twisting plotlines, its biggest strength lies in the characters. I can give only a brief glimpse of Attolia’s development, especially because each installment comes with its own revelations and surprises, but I hope it’s enough to illustrate how our perception as readers is directly influenced by the perspective(s) a writer chooses. I don’t think anyone relishes being proven wrong, but in this particular case, the journey Turner takes us on in order to prove us wrong about Attolia is more rewarding than being right.