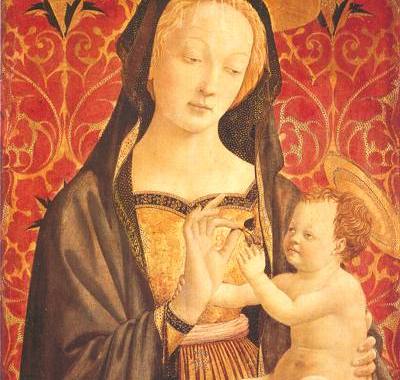 “Hail, Holy Queen, Mother of Mercy, hail our life our sweetness and our hope. To you do we cry, poor banished children of Eve.”~ Salve Regina (Roman Catholic Marian Prayer)

In the first two posts for this month, K.P. touched on how the Christianization of Europe affected modern views of motherhood. It became a far more exalted office, in large part due to the Church’s exaltation of Mary, the mother of Christ. The “Madonna and child” became a popular theme for literature, music, and art, rejoicing not just in Jesus, but in his mother, as well.

But the question arises–why such a fascination with the mother? After all, the medieval Church did not hold that Mary was divine. And yet she receives such praise as being called “Holy” or “the Queen of Heaven.”

To answer this question, we must take a look at basic story structure. (Wait–what? Story structure? How did this blog on motherhood turn into a writing lesson all of a sudden?)

“Bear” with me a moment.

Imagine a story–Once upon a time, there was a young girl named Goldilocks who found a house in a forest. She was cold, so she went inside to see three chairs by a warm fireplace. She sat in the first chair, but it was too big. So she sat in the second chair, but it was also too big. The third chair was just right, so she warmed herself by the fire.

All that food and warmth made her very sleepy, so she went upstairs to find three beds. The first bed was too hard. The second bed was too soft. The third bed was just right, so she fell sound asleep.

What? Were you expecting a bear to come back or something? Because that would be awfully disappointing to set you up expecting one thing and never actually deliver.

People generally do not like their expectations to go unfulfilled. We may not expect that it’s a family of bears, but we at least expect that this little thieving, house vandalizing girl will get some sort of comeuppance.

That’s the beauty of the fairy tale. We expect the ending, and yet…we don’t. (G.K. Chesterton has a terrific essay on this very topic here)

And so, the story of Mary does not begin in the New Testament, but in the Old. All the way back to the very beginning when Eve took a bite of fruit. That was the story “in the beginning.” The first woman–often called the “mother of mankind”–disobeyed God and ruined it for everybody (you can read that story here).

And so, to the early Church spreading across Europe, Eve became “the temptress.” She

was a representation of womanhood left unchecked.1

But the much of the rest of the Old Testament (in the canonized Bible) contains, in storytelling terms, foreshadowing about a Messiah. There is an expectation that the conflict will be resolved in a way that is both expected and yet unexpected.

Isaiah 7:14 says, “Therefore the Lord himself will give you a sign: The virgin will conceive and give birth to a son, and will call him Immanuel.”

I mean, every author will say foreshadowing can’t get more blatant than that.

So when it comes Mary’s moment to enter the story, a really long time has passed between Eve, Isaiah, and Mary. Maybe it’s like expecting a friend to come over, and the friend said she be there “noon-ish,” but it’s already nine p.m., and you’re tired and want to go to bed. The expectation has gone unfulfilled for so long you’ve given up on expecting it.

Until Mary goes to her cousin Elizabeth and tells her she’s–expecting! (Come on…you had to know the pun was coming…)

(I would also like to pause and give a shout out to this moment of two excited cousins sharing their pregnancies with each other–which goes to show the more things change, the more they stay the same.)

But it also speaks to the story’s purpose to begin with. What Eve created (according to some scholars–we can debate Adam’s role in the whole thing at another time) was a hopeless situation; the child Mary bore restored the hope that was lost. That hope came, not through some divine warrior sent hurtling down to earth; not from a mysterious basket left lying in the woods with unknown parentage; nor from the planet Krypton.

Rather, it came from a teenage girl and her baby.

That’s a pretty…unexpected twist. Even with all the foreshadowing.

Yet, as K.P. pointed out, the Christianization of Europe began to exalt motherhood because Mary was exalted as a mother, and prize infants because an infant became for them the hope of the world. We see remnants of this play out in the modern world as we listen to celebrities sing that “children are our future” or call out the refrain “think of the children!”

While the romanticization of children came a bit later (thanks, Romantics!), children became prized in Europe as inheritors, but also as the “hope for the future.” Practices such as exposing unwanted infants became anathema, and the status of mothers increased, as these women were responsible for producing the future.

Of course, this caused other problems such as allowing women to become prized only for what they could produce, but that is a topic for another time. Since our theme this month is motherhood, we can at least address the important role mothers played in Europe in the Middle Ages and understand their status increased, in large part, because they were seen as bearers of hope. In some (hotly contested) theologies, motherhood was even seen as a way to “escape” Eve’s curse.

Which brings us back to our quote for this month’s theme–“hail our life, our sweetness, and our hope” says the prayer, and it is addressed from the “banished children of Eve.” The banished children who remain banished no longer.

Somewhat unrelated (but kind of not), I thought I would put in a shameless plug for one of my favorite poems on the hope of a new life from early feminist (and Mary Wollstonecraft rival) Anna Letitia Barbauld:

For many a moon their full perfection wait,—

What powers lie folded in thy curious frame,—

Senses from objects locked, and mind from thought!

How little canst thou guess thy lofty claim

To grasp at all the worlds the Almighty wrought!

Haste, infant bud of being, haste to blow!

For thee the nurse prepares her lulling songs,

But far the most thy anxious parent longs

On thy soft cheek a mother’s kiss to lay.

She only asks to lay her burden down,

That her glad arms that burden may resume;

That free thee living from thy living tomb.

She longs to fold to her maternal breast

Part of herself, yet to herself unknown;

To see and to salute the stranger guest,

Fed with her life through many a tedious moon.

Bask in the fondness of a Mother’s eye!

Nor wit nor eloquence her heart shall move

Launch on the living world, and spring to light!

Opens her thousand inlets of delight.

If charmed verse or muttered prayers had power,

With favouring spells to speed thee on thy way,

Till thy wished smile thy mother’s pangs o’erpay.