Among the philosophers and scientists of antiquity, the name of Hypatia comes readily to mind when we consider the women in that category. Yet other contributors left their mark on our understanding of the world and one of them, Cleopatra the Alchemist, selflessly gave the Western world a beneficial apparatus that can still be found in laboratories today.

Exactly when Cleopatra lived, we can’t be certain. Estimates place the time of her birth somewhere between the first and fourth centuries of the Common Era. We do know that she lived in Alexandria, Egypt, and that she was regarded as a master of the alchemist’s art. Yet her history is suffused with mythology, and the popularity of her name leads to confusion with the famed last queen of the Ptolemies and other similarly named women who made their own contributions to the world (among these, most notably, is Cleopatra the Physician.)

For the ancient alchemist, the greatest of transmutations didn’t involve base metals becoming silver and gold. Rather, the alchemist sought the means of turning plants and minerals into useful medicines. Then, as today, the alleviation of suffering was big business and alchemists who won fame and glory did so not because of their mystic mutterings, but through the efficacy of their cures.

In The Dialogue of Cleopatra and the Philosophers, a meeting between the great woman sage and a group of her male peers occurs. In this meeting, prompted by the men assembled around her, she “casts light” on a number of natural mysteries. Her understanding of the material world amazes and slightly terrifies her audience, among them mythic Ostanes who taught Egyptian magic to the rest of the Hellenistic world. Here she makes an analogy between the goal of the alchemist (the transmutation of base matter into something useful) and natural growth in the vegetable and animal kingdoms. Her erudition clear, no trace of chauvinism exists in her audience who listen attentively and recognize her wisdom.

The Chrysopoeia of Cleopatra, a single scroll of vellum containing mystical diagrams with precious little explanation, reveals an understanding of the trade secrecy that surrounded alchemy and the other early sciences. The image of a serpent devouring its tail, a cypher wheel, and an astronomical event captivate the reader with their obscure meanings. Yet among the enigmatic doodles, one image truly stands out.

The Chrysopoeia of Cleopatra

Among the pure symbols of the “Royal Art” a single image seems to offer some connection to material reality. Two circles connected by a long neck, topped with triangular protrusions, appears to depict an early distillery called an alembic, and it’s this piece of equipment that solidifies Cleopatra as one of the great humanitarian scientists of all time. 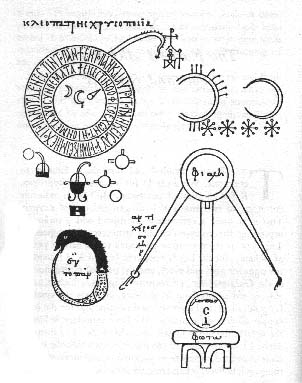 The Alembic of Cleopatra

To the alchemist, distillation lay at the heart of the science. Producing spirits for the tincturing of herbs required special equipment, and the alembic provided a way to obtain the solvent needed for the manufacture of beneficial elixirs and medicinal stones.

The mystic treatise known as The Emerald Tablet of Hermes Trismegistus, being the central instruction for all alchemical endeavors, describes the process of environmental evaporation and condensation, though it does so through a thick veil of symbolism. In offering a diagram of her alembic, Cleopatra sought to make the alchemical art easier for the practitioner without revealing the true meaning of the Tablet. It’s a coup of epic proportions, the equivalent of large pharmaceutical company today giving away a valuable patented medicine for the sake of the betterment of humanity.

While Hypatia will continue to be considered the paragon of the ancient woman of science, Cleopatra the Alchemist should be regarded as one of the first philanthropists to make her name and fortune in the tech sector. Retaining the alembic’s design for herself and her students would have given her an edge in the manufacture of reliable medicines, placing her in a position to travel, teach, and heal a wide variety of ailments. But rather, she opted to transmit her thought, sow her seeds broadly, reveal her design, and let her peers make their own discoveries.

Debus, Allen G. Man and Nature in the Renaissance. Cambridge: Cambridge UP, 1978. Print.