This is will be my second post on a historical figure featured in Disney films. Maybe I’ve been more influenced by Disney than I’d like to admit. As usual, the film does not follow the history, but serves to heighten the mythological story of a real person.

We don’t know how Pocahontas felt, or her motivations in her story, but what we know

about her is quite a story unto itself, but she’s become more than just that. She’s a figure of compassion, tragedy and encapsulates the destruction of the Native American peoples’ way of life at the hands of the Europeans. Pocahontas remains a noble figure even in the face of violence and hatred. Somehow she remains personally, above the fray. Her history is obscured by time, but the mythology of the part she played is simultaneously romantic, poetic yet voiceless. There is never a moment in the records that we “hear” Pocahontas speak. But she plays a big role in the awareness of two prominent colonists, John Smith and John Rolfe.

According the famous story put forth by the unreliable John Smith, she saved his life at the very moment her father, the Chief Powhatan had sentenced Smith to death by putting herself between the instruments of death and Smith.

“…as many as could laid hands on him (Smith), dragged him to them, and thereon laid his head, and being ready with their clubs to beat out his brains, Pocahontas, the king’s 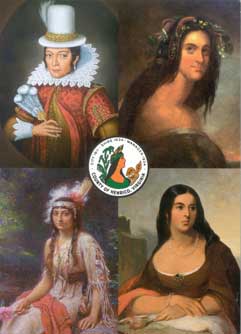 dearest daughter, when no entreaty could prevail, got his head in her arms, and laid her own upon his to save his from death.”[1]

There’s a lot doubt surrounding Smith’s story, especially since it grows more elaborate with his own retellings, but there is something that rings true about what we do know about Pocahontas, she had compassion. Well, ok, maybe we can’t even go as far as to say that. Maybe what Pocahontas had was mere curiosity. But just the same, the colonists of Jamestown, who had failed to plant crops in order to survive and instead embarked on rabid searches for gold, recorded a young Pocahontas bringing them gifts of much needed food. Pocahontas, which was a nickname, possibly meaning “little playful one” was only about twelve years old at the time.

Jamestown had an exceedingly difficult start. Much of it had to do with the colonists disinterest in planting crops, as well the swampy mosquito ridden area they had chosen to establish themselves. These things were quite the recipes for disaster. Out of 500 settlers in 1609, only 60 were left by the spring of 1610.

disbelief over the Englishmen’s folly. While the relationship between the settlers and the Powhatans were shaky at best, Pocahontas, young and representing her people arrived with life saving food. She was the face of possibility between the two cultures. There were attempts to garner positive relationships. These often failed, mostly through cultural misunderstandings, external pressures and pure aggression. Nonetheless, Pocahontas was painted as a figure that stood outside of all this. Her gifts of food were seen as acts of kindness.

This compassion would not be rewarded, Pocahontas’s bridge building seemed to be focused on John Smith. Then again, Smith has claimed to be the focal point of many international women. Nonetheless, when he returned to England because of an injury, relations between the settlers and Native Americans turned into openly hostile.

The final chapter of the European recording of Pocahontas’s story was one that united two cultures. Though marriage and the birth of her son Thomas Rolfe, she would embody the possibility of unity. Yet again, this only seems possible through her kidnapping and conversion to Christianity — unity utterly on European terms.

father as well as weapons, her previous kindness was easily forgotten. However, her father the Chief was not interested in a trade of any kind. So Pocahontas remained with the settlers, eventually becoming Christian, adopting an English name (Rebecca), marrying and having a son with the widower John Rolfe.

We don’t know what Pocahontas thought of all this and how willingly she submitted to it. Possibly, it was a choice for personal reasons, perhaps she saw an opportunity for peace between her people and the English, or she could have been forced or coerced into it all.

Still, American imaginations have been enticed by the story of Pocahontas, both history and mythology. While we will never know exactly what she thought of the things she experienced, we continue to be curious and remain fascinated by her.

John Rolfe said, “I utter the effects of this setled and long continued affection (for Pocahontas)…”[2]

Us too John, us too.