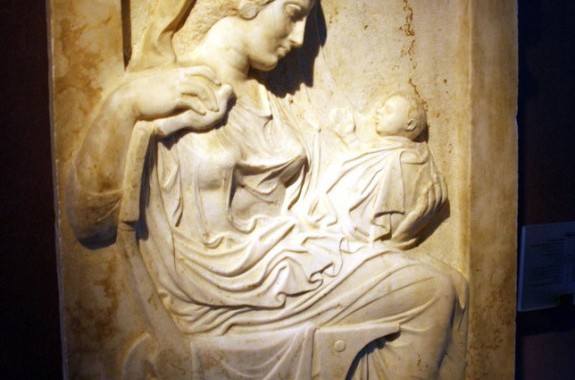 While Halloween is over, the leaves here in Ohio have turned into crisp yellows and warm reds and with those colors, beautiful death abounds. Autumn is the season of death, the passing of one thing, but also, the promise of something new.

November has always felt like a more appropriate time to think about these things. It is one of the reasons I chose an inscription on a Hellenic funeral stele for November’s theme. The inscription serves to memorialize the deceased woman, but to also remind that women play many roles in a single life, that while there may be the passing of one role, there can be many adventures waiting around the next bend.

For this week’s featured site, I’m actually going to point readers to a couple sites on Ancient Greek funerary steles. Along with some background for the curious, the sites (of course) include images of engaging and endlessly fascinating artifacts that shed light on Ancient Greek funerary practices and how they honored their dead. In turn, how they acknowledged and honored the many identities a person held within their lifetime.