A woman gives birth in the Roman Empire. It is in the pagan era that has only seen the light touches of the religion known as Christianity, just enough for the foreign religion to seem odd and at times annoying. Some people whisper that Christians hold meals where they dine on flesh and drink blood.

This Roman woman doesn’t care much for those things, especially now, she’s crossed the threshold into motherhood. Perhaps she’s thought of herself as a mother a bit too soon. She looks toward the midwife as the woman inspects the newborn, pulling at the red limbs, feeling for strength and signs of illness. Did he cry loud enough? The midwife nods to herself and brings the child to her, where the woman performs her own amateur inspection.

The structure of the Roman family surrounded a male head – the paterfamilias. This man literally held the power of life and death over members of his family. When an infant was born to the household, he often relied on the expertise and report of the midwife to determine if the child would be accepted into the family at all.[1] Rejection meant the infant would be exposed and would ultimately die. If the child was lucky or unlucky, depending on your perspective, he/she would be found and picked up to be raised as a slave.

There were several things that went into this decision, the most obvious being the infant’s health and form. A child that appeared sickly or weak, or was born malformed was likely rejected by the paterfamilias and left exposed to the elements and wild animals. This practice, cruel to modern audiences, was a sensible act in the perspective of Roman society, which greatly valued accomplishment and success over potential.

inheritances. If the family would be financially challenged or the addition of another child could disrupt an already well-distributed and portioned inheritance among the current members of the family, he may also choose to order the infant to be left to exposure. Mothers had little legal say in such decisions.

As a modern audience, this system is horrifying. Yet to Romans, while it could be difficult, it was part of the weight the paterfamilias was expected to bear. Even adult family members could be, in extreme situations legally executed. In one source, we are given the perspective of a paterfamilias on such decisions.

“For when in my Garden I prune and cut off the lower branches which grow about the Lettice, the mother and root of them is so farre from being grieved threat, that she flourishes the better, and becometh both fairer and sweeter.”[2]

For Western civilizations, whose cultures have been reshaped by the evolution of primogeniture and Christianity, it is difficult to understand the cultural perspectives of Roman society. Modern Western culture greatly values potential. We see abilities as innate and present from birth, we often celebrate natural-born talents over accomplishments. We particularly hail intelligence, something the individual has no control over. The Romans thought well enough of intelligence, but it was like finding a wad of fine clay, a raw material and its final form unpredictable.

For the Romans, potential held little value. The process of becoming something was not particularly important, instead the arrival, the achievement of success was the defining factor of value. Infants are the epitome of undefined potential. There is much possibility as well as the possibility of nothing at all, either from infant and child death or simply

lack of ability or some character flaw. The Roman story of a daughter Pero, who breastfed her father Cimon jail is a great example. Despite the creepy imagery, to the Romans this story was a celebration of Pero’s dedication and loyalty to her father—the paterfamilias. For anyone who knows about milk production, we have to understand that she would have nursed her father at the expense of her infant.

Another part of the weak value system surrounding infants was the fluidity of familial relations in terms of birthright—in that the station of birth did not determine ownership of the inheritance of titles or wealth. Blood relation was not absolute. For example, it would have been ludicrous for an exposed infant to somehow survive and grow to adulthood and attempt to return to claim connection or inheritance from their birth family. That sort of thing was an element of fantastic stories instead of daily realities. Additionally, Romans frequently practiced adoption of both children and adults. Adoption was the cementation of clan affiliation and loyalty, a binding as close as family ties. These arrangements had less to do with charity, but more often the loyalty and demonstrated capabilities of the adoptee who would often become a designated heir. Or the establishment of a heir in the absence of children.

To a lesser degree, but still important, these bonds could also be created through marriage. However, marriages were broken relatively easily, especially among the elite for more advantageous matches, there was little care if there had been children from the previous marriage. The first emperor of Rome, Augustus had Livia’s marriage dissolved so he could marry her himself while she was still pregnant with her then-husband’s child. The inheritance of property or titles did not necessarily follow family lines, but instead, clan loyalty and could be designated and re-designated by the paterfamilias at will. Neither was there any particular hierarchy based on birth order.

All of these factors contributed to small importance placed on a family to produce children, as well as a low emphasis on motherhood, especially when attached to a woman’s identity and societal expectations. While women held limited formal legal and political power, they were not seen as mere vessels of childbirth and had access to education and freedom of movement. When it came to education, the real factor was wealth. In government, women were not at all invisible and were often figures of significant influence. They held roles that could vary, as wives and mothers, but also serving time in religious life or the pursuit of education. Most upper class women hired wet nurses to provide milk for their infants, choosing to free themselves from the duty. There is some evidence that points to the possible existence of a wet-nurse marketplace, where potential women to fill the role could be interviewed and hired.

Certainly, there were differences in families on how much say a woman held over the acceptance or rejection of her newborn into the family and therefore life. Depending on 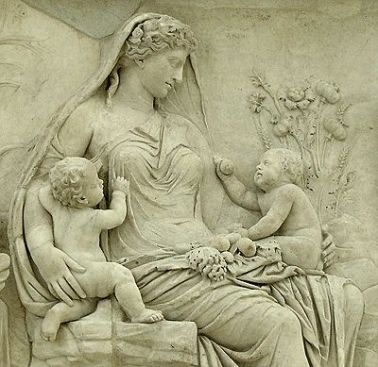 the paterfamilias some women most likely were allowed to make that decision, or heavily influenced a decision. There were women who likely agonized over a malformed child, fought the decisions of their paterfamilias and others who were more accepting over it. The way Romans saw infants seems to indicate that they may have viewed infant exposure as equal to a late stage abortion or even an act of mercy for a sick infant or a household with financial constraints.

Before the popular spread of Christianity, Roman women enjoyed greater value as part of the Empire for their family connections and individual demonstrated capabilities. Small esteem was placed on women as mothers comparatively and even less on an infant’s life.

The importance of these roles would be reshaped with the spread of Christianity. The Western European world would create a system that depended on blood-relations and the birth of heirs. As a result, women lost significant personal freedoms, gained singular value as mothers and the birth of children would become of utmost importance.

In the next part of this series, I will discuss how these things changed, the effects on society and the new realities of exalted motherhood.

[2] Claudius Aelianus. “XXIV: Of a Father Who Accused His Son of a Capital Crime.” University of Chicago. Accessed April 1, 2018,   http://penelope.uchicago.edu/aelian/varhist1.xhtml#chap34